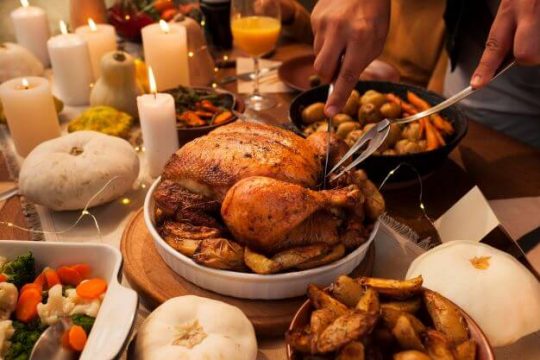 Cook a Turkey for the Thanksgiving Day

Thanksgiving is undoubtedly one of the most important traditions celebrated in America. You may have seen it on television or in movies. But what is it really or why is it celebrated on this date? Thanksgiving or Thanksgiving Day is a traditional holiday of the United States that is celebrated every year on the fourth Thursday of the month of November, this year, on November 26.

It is a family celebration, with abundant food and a dinner in which you give thanks for what you have. Originally the purpose of Thanksgiving Day was to give thanks for the harvest, which in most cultures has been done, holding celebrations of gratitude to their corresponding divinities for the blessing of an abundant harvest.

Although they may be separated during the year, when the Thanksgiving feast arrives, all family members gather for dinner at the home of the oldest relative, usually the grandparents.

The traditional thing is to give thanks for all the good things they have and ask for blessings for their own. In this spirit of sharing, civic groups and charitable organizations offer a traditional meal to those most in need in their community, particularly the homeless. Many of the foods that were served on the first Colonial and Native Thanksgiving are served on tables across the United States, and for this reason people eat turkey, corn, squash, and cranberry sauce.

why is turkey eaten?

Just on Thanksgiving Day in the US about 45 million turkeys are consumed. The origin of this traditional cuisine meal is related to the invitation to eat that the native Indians received from the Mayflower pilgrims to thank them for their hospitality. The most striking thing is, according to some historians, that during that first dinner together, they did not eat turkey but fish, duck and venison.

While there is no reliable confirmation of what was cooked in the first dinner Thanksgiving folk version favors a menu crowned by a "wild" turkey. Over the years, the turkey has stopped being wild to become a poultry that is fed during the year and then slaughtered to become the main protagonist of the Thanksgiving table.

How to cook delicious turkey